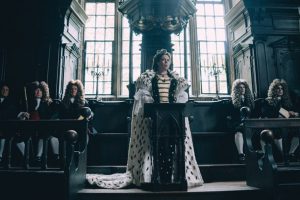 The Favourite, a movie that is loosely based on historical fact, was always going to generate a big reaction at the Venice Film Festival.

Olivia Colman plays the frail and slightly unhinged early 18th century British monarch, Queen Anne, who jostles with two woman in a power struggle in her court as they vye for her sexual favour. Lady Sarah, the Duchess of Marlborough (Rachel Weisz), whose husband is away fighting the French, is effectively running the country. But when her conniving cousin the Queen’s new servant Sarah (Emma Stone) arrives, the naïve monarch is seduced by her charms.

For a second time this year Weisz has a woman-on-woman love scene after Disobedience with Rachel McAdams, while the film marks a follow-up too for Oscar winner Stone after her portrayal as Billie Jean King in Battle of the Sexes.

At The Favourite’s Venice press conference, the usually hilarious Colman (The Night Manager) was asked about the sexual politics in the historical film, to which she replied, “There was a lot of it!”

“That aspect of the film is timeless. We think we invented sex but we didn’t. It’s been going on for quite a long time. It was awfully fun having sex with Emma Stone.”

“It was really fun having sex with you too,” Stone quipped.

In the film, directed by Yorgos Lanthimos (The Lobster, The Killing of a Sacred Deer starring Nicole Kidman) Stone plays an educated aristocrat who has lost her status and will do anything to get it back. At the age of 15 her father lost her to a fat German with a thin penis in card game. She may be devious but she’s not evil, says Stone.

“She’s overcome a lot, she’s a survivor. I loved every element of getting to play her. In terms of the challenges for me I was the only American in the cast, so it was a bit daunting trying to make sure that the accent made sense. The corsets were a challenge too just because you can’t breathe all day.

“The whole cast had this three-week rehearsal process before we started shooting and it was far from traditional. We did a whole bunch of crazy stuff. We had to learn to be embarrassed in front of each other and rely on each other. I think by the time we were shooting we all felt very close and comfortable. When I had to have sex with the Queen, with Olivia, it was very comfortable. We were very good friends.”

I asked Colman, who is playing Queen Elizabeth in season three of The Crown, about playing two queens in one year.

“They’re not very similar,” she deadpanned, “and that’s good. We’ve started filming on The Crown and I’m having a lovely time, so I hope I don’t let you down when it comes out. I can’t really compare the two queens. I don’t think Queen Elizabeth learned anything from Queen Anne!”

I then suggested that the heavily bewigged Nicholas Hoult, whose brilliant blue eyes are offset by a stunning Sandy Powell royal blue costume, and Joe Alwyn (otherwise known as Taylor Swift’s beau) were playing women as well.

“It was fabulous!” replied Hoult.

Colman: “I just want to give you a visual of Nick who is 6’ 2” with heels and a foot and a half of wig! None of us could look at him when we were acting because it was just too funny.”

Alwyn added, “It was a lot of fun running around in wigs, in high heels and in fancy costumes. It’s every man’s dream!”

While the film’s story delves into the power that the three women held as they made decisions on a whim that could effect millions of people, can it also be seen as a statement about women’s empowerment post MeToo#?

“Obviously I don’t mind that idea, but we can’t take credit because we started the project many years ago,” Lanthimo replied. “I think the positive aspect of this film is that it focuses on three female characters, which is rare. But what we tried to do is portray them as human beings, because most of the time, given the prevalent male gaze in cinema, women are portrayed as housewives or girlfriends or objects of desire. So we tried to show them as complex and complicated, wonderful and horrific. They are like every other human being.”