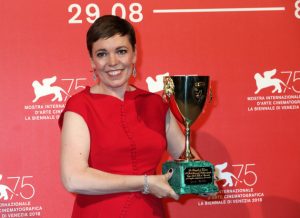 (Photo by Elisabetta A. Villa/WireImage)

Olivia Colman has won one of the highest accolades of her career so far, after being named best actress at the Venice Film Festival.

The British actress bagged the award for her performance as an ailing Queen Anne in the upcoming period drama ‘The Favourite’ in which she stars opposite Rachel Weisz and Emma Stone.

The film tells the story of the rivalry between two of Queen Anne’s cousins, both bidding to be considered her “favourite”, and also stars British actors Nicholas Hoult and Mark Gatiss.

So far, critics have lauded ‘The Favourite’, particularly Olivia’s performance, as well as director Yorgos Lanthimos, who previously worked with the actress in ‘The Lobster’.

Olivia had stiff competition for the best actress award, particularly from Lady Gaga, whose performance in ‘A Star Is Born’ – which also debuted at the festival– has also won near-unanimous praise from critics.

It was a big night for ‘The Favourite’, which also scored the Grand Jury Prize, one of the Venice Film Festival’s biggest honours, though the top award went to Alfonso Cuarón’s family drama ‘Roma’.

Olivia is currently gearing up for another regal role, picking up where Claire Foy left off in the Netflix drama ‘The Crown’, in which she’s to play Queen Elizabeth II in middle age, opposite Tobias Menzies’ Prince Philip.

Initially making a name for herself in roles in British comedies like ‘The Office’, ‘Peep Show’ and ‘Black Books’, Olivia is now better known for her drama performances including ‘Broadchurch’, ‘The Night Manager’ and the upcoming ‘Les Misérables’ remake, in which she’ll play Madame Thénardier.

Last year, she also joined the all-star cast of Kenneth Branagh’s new take on ‘Murder On The Orient Express’, which also featured the likes of Dame Judi Dench, Penelope Cruz, Derek Jacobi and Branagh himself.

‘The Favourite’ is due for release in the UK in January 2019, but will be showcased at the upcoming BFI London Film Festival.