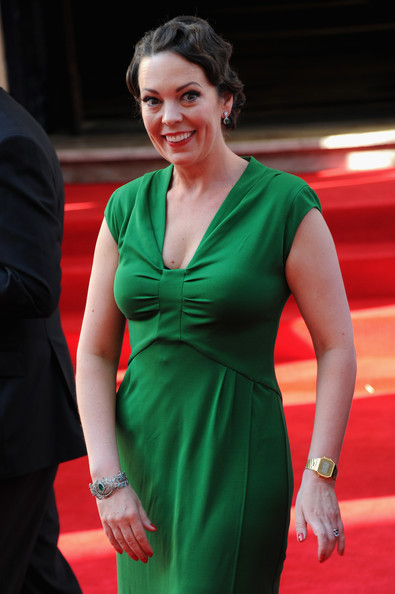 OLIVIA COLMAN, aka one of the only humans to jump into bed with Peep Show’s Mark Corrigan, and Jonathan Ross are joining forces for BAFTA 2016.

The UK stars have jumped aboard the EE Rising Star Award jury to help choose the shortlist for next year’s gong – the only accolade at the ceremony voted for by the UK public.

Whomever is crowned the winner looks set for a glittering career, judging by previous triumphs.

He has since secured a role in Jodie Foster flick Money Monster as well as starring opposite Oscar-winner Christoph Waltz in upcoming project Tulip Fever.

Thrilled with her involvement, Colman said: “I feel very privileged to be sitting on the jury panel for the EE Rising Star Award.

“It’s so important to have a category that recognises up and coming talent.

“After reviewing the actors and actresses that have emerged this year, whittling down the shortlist is going to be no easy feat but I’m looking forward to it enormously.”

The 41-year-old, along with Ross, will team up with a host of industry experts for the task at hand, including Harry Potter director Mike Newell and casting director Nina Gold.

Nominees will be announced January 6, with the winner revealed at the bash on Valentine’s Day.

Not sure if he counts, but can Nemo get a nod for his role reprisal in Finding Dory?!

Source: dailystar.co.uk – Find out why Peep Show star has teamed up with Jonathan Ross

Just call it the Olivia Awards! 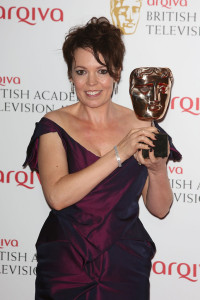 Her face may have been familiar. But before the runaway success of Broadchurch, you may not have known her name.

Last night, however, Olivia Colman changed all that when she picked up two awards at the Baftas – days after she revealed she thought she’d miss out on roles because she wasn’t ‘the archetypal looker’.

Indeed, the normally mild-mannered actress was so shocked at her win that she turned the air blue muttering ‘f***’ before quickly apologising.

Miss Colman, 39, won the award for best supporting actress for her performance in BBC1’s Accused (Mo’s Story) and for best female in a comedy for her part in BBC2 Olympics satire Twenty Twelve.

The star, who has two sons, topped off a successful year when she appeared alongside David Tennant in ITV1’s crime thriller Broadchurch, She has also starred as Margaret Thatcher’s daughter Carol in The Iron Lady.
But last night she was honoured for her portrayal of Sue Brown, the mother of the victim of a gangland killing in The Accused.

The actress, who looked glamorous in a purple dress, said: ‘I can’t believe it. I keep thinking it’s wrong. I feel very wobbly. I thought I might be in with a chance for Accused, because it is such a beautiful script. But Twenty Twelve, I didn’t think, because I was against such wonderful talents.’

She added: ‘Hollywood hasn’t called, unless they have got a digit wrong. Of course I would go if they asked. It’s warm and they pay better. I wouldn’t like to live there as I’ve got a family, but who wouldn’t go for a couple of years.’

In an interview last month she said: ‘I’m never cast as the love interest. I’m just not seen as that girl.  I’m just not the archetypal looker. You see a row of girls and go, “There’s the classic beauty”. And that was never me.  I never really minded and I’m grateful now because I think it’s so much harder for beautiful actresses to last in the business.’

And her shock was apparent each time she was welcomed back on stage by host Graham Norton After the second trophy for her role in Accused, Olivia told the crowd while looking clearly delighted: ‘Thank you to my agents… I love you and I’m never, ever leaving! Also to Mr Hands, my first drama teacher, thank you very much. To my husband and best friend.’She then quipped jokingly: ‘And my children, if you’re watching it looked like I said a bad word, I didn’t… oh and my parents for babysittting, thank you very much.’

But her shock was even more visible as her name was read out for the third time for her role in Twenty Twelve.

Appearing choked she said: ‘I’m really sorry – (other category nominees) Miranda, Jess and Julia, three girls who I just love. I really didn’t expect it. Thank you so much.’The 39-year-old actress told BANG Showbiz at the winner’s press conference: ‘I’m a bit wobbly. I just can’t believe I’ve won. I keep thinking it’s wrong and they’ve made a mistake.
‘I thought I might be in with a chance for the drama award because Accused is such a beautiful script. But the comedy award I didn’t think I would stand a chance against those girls.’

I was apalled to see that Olivia had not been nominated in the BAFTAs this year after such an incredible run of performances from her. She deserved to be recognised by these awards and I was so upset to see that they had overlooked her, however I was heartened when I saw how loved she is via Twitter where celebrities and us normal folk alike were using their 140 character limit to let the world know just how upset they were at this! It is truely incredible to see how loved and appreciated Olivia and her work is and I hope she saw our upset at her being overlooked at the BAFTAs and realised that we love her.