Mosquitoes at the National Theatre review 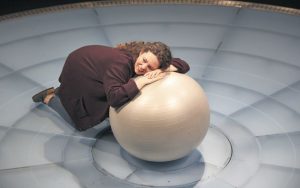 Alice is a physicist working at CERN. Her sister Jenny is the kind of Google-trained, self-proclaimed “expert” who chain smokes but distrusts diet coke and worries that vaccines cause autism. Lucy Kirkwood’s latest play, following the excellent Chimerica, pits them against each other, in a grudge match of reason vs emotion that ranges from the risk of ultrasounds to the potential destruction of the universe at the hands of meddling scientists.

Both characters are deeply flawed, and it’s commendable to see portrayals of people who have suffered personal tragedies being forced to confront their actions rather than be coddled as helpless victims. The dialogue and acting are strong throughout, especially from Olivia Williams (Alice) and Broadchurch star Olivia Colman (Jenny) as the sisters. Their opening scene is a spectacular argument on the merits of facts over parental instincts, and is hilarious and moving to boot.

Colman in particular shines as an unsympathetic and tactless pseudoscience advocate, who nonetheless at times displays more emotional intelligence than anyone else in the play. A special mention should also go to Paul Hilton, who plays Alice’s estranged partner, a brilliant but unhinged physicist listed in the credits simply as “The Boson”. His monologues on the wonder of scientific discovery, fused with the visceral panic of experiencing mental breakdown, are sensational.

It’s quick-witted and thought-provoking, with a phenomenal set that at times resembles an intimate planetarium. It’s a shame, then, that there are too many competing plotlines and themes, which resolve towards the end in an unsatisfactorily forced conclusion. At crucial moments of tension, competing threads detract from the main story, with fresh crises looming before the audience has had time to properly process the last.

This is, at its core, a play about science, and how we talk about science. It’s about the way we all misunderstand risk, distrust experts, and dismiss those we consider too stupid to understand our own reasoning. When the play focuses on this, it’s a work of rare brilliance. The problems arise when it gets sidetracked by other themes: the challenges faced by women in technical fields, loss of agency in old age, children’s desire not to grow up like their parents, sibling rivalry, mental illness, motherhood, guilt. While these are all interesting topics, there just isn’t time to explore them properly.

Come for the acting, stay for debate on scientific communication, and try to forgive the convoluted plot.