The Favourite to premiere at BFI London Film Festival Gala 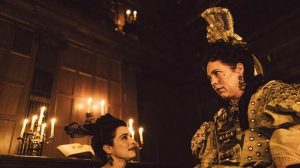 The Favourite will be shown on the event’s American Express Gala night at Cineworld in Leicester Square on October 18.

Directed by Academy Award-nominated director Yorgos Lanthimos, known for The Lobster, the film is set in the early 18th century against the backdrop of the war between England and France.

Colman plays Queen Anne, while Weisz portrays Lady Sarah, her close friend who governs the country while the tempestuous Queen is unwell.

However, Lady Sarah’s close bond with the Queen is threatened when charming new servant Abigail, played by Stone, arrives, and she sees a chance to return to her aristocratic roots.

“The Favourite is a delight from start to finish, powered by a trio of riotous performances from Olivia Colman, Emma Stone and Rachel Weisz, who are all clearly revelling in the wit and rhythm of the script. The perfect Gala for our principal partner, American Express.”

The film festival kicks off on October 10 with Widows, directed by Steve McQueen and starring Viola Davis.